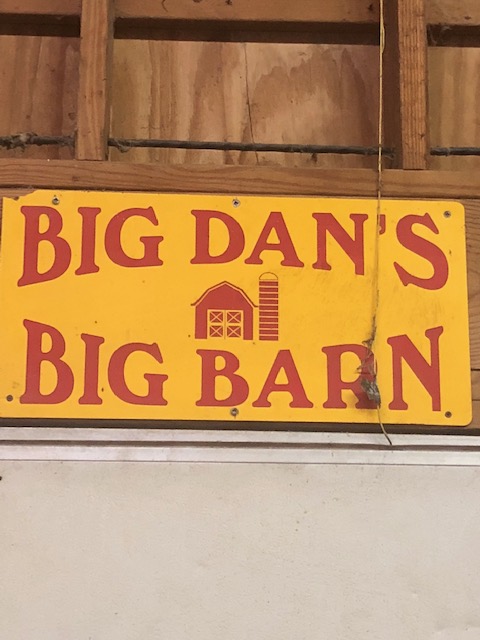 Before I share about Dan’s big feed I should probably give a little background. Dan is a retired farmer and now government employee and his wife, Paula, is a retired math teacher. I met them over Thanksgiving 2018 when I was invited to a down east oyster roast. Dan and Paula had 12 of us over for 3 bushels of oysters and several pounds of shrimp. It’s fun working for our dinner. There was repartee and jokes while we shelled shrimp and shucked oysters. I hadn’t shucked oysters in a long time but it really comes right back to you and is fun. There was so much food that we forgot to get the salad from the refrigerator. No one missed it. It was after that event that we were invited to the New Years Day “down on the farm!” I was introduced to Dan and Paula by Amy Powers and Rich Murray. There is a long history.

New Years Eve was spent at Rich and Amy’s smoking pork shoulders. Amy is the daughter of Ray Bittner, my travel partner. It was a laid back day full of chatter and friendship. Dan and Paula came over around 5 pm and the pork chopping began. The secret is having really sharp meat cleavers and keeping your fingers rolled away from the blade. Ouch. I really don’t remember how many pork shoulders there were but as they say down east in North Carolina, “It was a gracious plenty.” While visiting and chopping there was plenty of beverages and laughter. We were ready for New Year’s Day!

We all met at the farm some distance outside of Ivanhoe, NC and down some scenic country roads. The day of the event chicken was grilled to add to the lunch. Good ole southern cooks brought in covered dishes and desserts. Lord, I’ve not seen that much food in a month of Sundays. Pork, Chicken, hush puppies, limas, peas, green beans and green bean casserole, potato salad, pickled okra, deviled eggs, and other southeast NC recipes that had been handed down through generations. Then, there was the dessert table! A couple of pound cakes, banana pudding, sweet potato pie with a hefty meringue. There was also baklava and MORE. Oh, MY!

I lost count but I believe 90 to 100 people showed up for the feast. I learned that Dan and Paula had done this celebration every year and this was the 20th year. It is their way to thank their friends and family for their friendship and to simply show southern love through meeting at the community table. While the food was delicious and plentiful, I must say that the fellowship is what made the day. I heard stories about old time farming and “barning” tobacco and other memories that were shared. I met many new folks from all walks of life. I even met a “cat lady” like myself. We showed each other pictures of our cats and got to know each other well. She also has a “thing” for dragonflies just as I do and that lead to an even deeper conversation. My grandmother, who was born in 1901, used to ask me, “What for time did you have?” I would have to respond that this was one of my best New Year’s Days in recent memory. I thank Ray, Amy, Rich, Dan, and Paula for making it possible. Happy New Year!

I retired January 1, 2016 and devoted myself to living a healthy and bold life. At the encouragement of my grown children I’m fulfilling my bucket list. All of it. Travel is a cornerstone of this endeavor.

My life partner died unexpectedly of cardiac arrest in November of 2016. Taking life support from one you love, even though it is what they wanted, is a sobering act. Life changed in a big way which included my coming to the realization that you have to grasp each day and go for it. I’m fortunate to have a wonderful family and friends. I’m thankful.

Having the means to do this is a blessing. I’m frugal so it helps to be able to travel and do more. I’ve learned that using airbnbs can save a lot of money and so far the places have been awesome. I also learned that airlines run specials and you can have alerts for price changes. This led to a two week stay in Norway and Iceland for air and rooms at less than $1300.

So….. This is the beginning…. My next trip is February 3 on a 5-6 month trip RVing across the country. I plan to blog my trip on this site. I may also posts some about my past trips to Norway, Iceland, New England, and the like. Hope you find it informative and that it gets you motivated to see the world. You can.