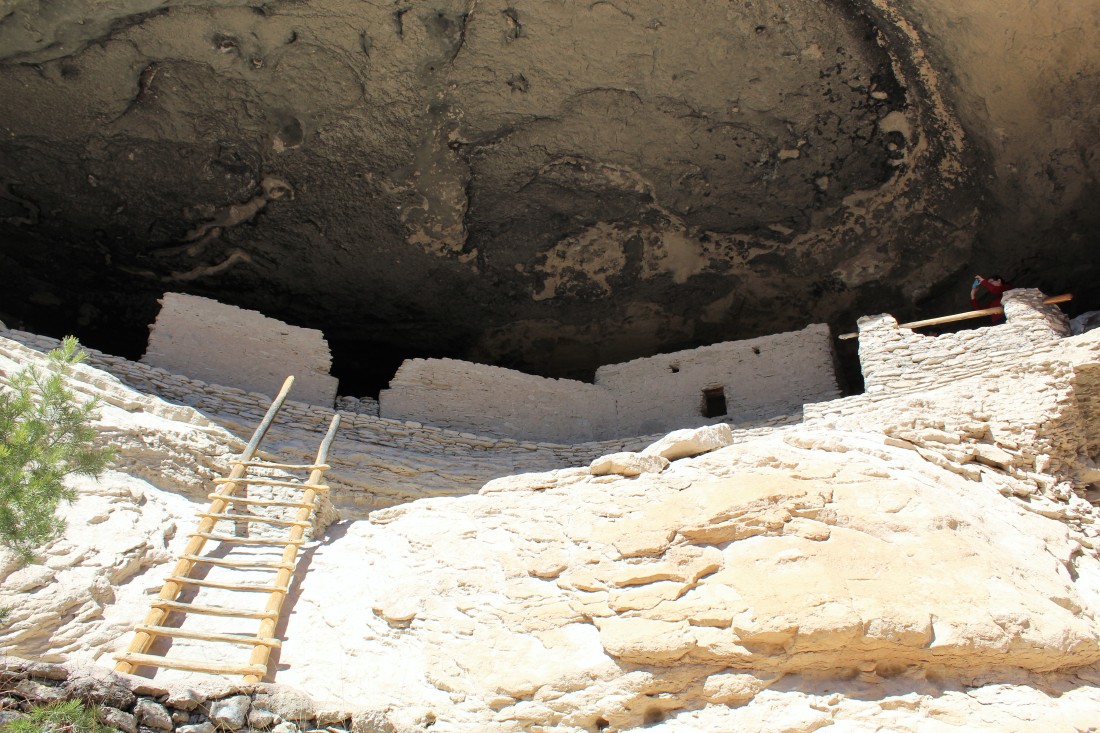 Silver City New Mexico was the base for our new adventure. We stayed at Rose Valley RV Ranch (Goodsams and Passport America $21.53/night). The sites are spacious and the park has full hookups and it’s well laid out so that each site has some privacy. We saw many jackrabbits each day, which was fun.

Silver City is about 44 miles from the Gila Cliff Dwellings National Monument and is home to Western New Mexico University, which has the most extensive collection of Mimbres Pottery. The pottery was scientifically excavated from the Nan Ranch. Outstanding, priceless collection.

The town of Silver City was once an Apache campsite, later the Spanish traveled through looking for copper. Silver City was founded in 1870 after Captain James Bullard and his brothers discovered silver on a hill west of his farm. The town is known for being home to Western New Mexico University, home to the Mimbres Mogollon tribes from 200 – 1150 AD, and The Big Ditch. The Big Ditch was caused by the great flood of June 21, 1895, which destroyed the business district.

The first caper was visiting Fleming Hall on the WNMU campus and home to the Museum of Mimbres Pottery. Free admission is such a bargain considering the museum’s collection is priceless and extensive. Note: pottery with holes in the bottom were used to cover the faces of the deceased for burial.

Gila Cliff Dwellings National Monument is in the Gila Wilderness on the Gila River with elevations from 5700 to 7000 above sea level. The wilderness is 553 acres and humans have traveled through and stayed in the caves for at least 10,000 years. Prehistoric hunters used the caves for shelter and the soot on the ceiling dates back to that time period. The Cliff Dwellings were built by the Mimbre Mogollon tribes around 1275 and they lived, farmed and hunted there for about 25 years. They disappeared in the early 1300s and many theories abound about their disappearance. The Hopi and other tribes claim them as ancestors through their oral history that says that the Mimbres were never staying there permanently as they were on a migration.

The Mimbres built tee-shaped openings to their dwellings. Hopi oral history says that it is to honor Maasaw, one of their deities, as the openings look like the shape of his head. This tradition still exists in modern Hopi and other tribes. The Gila Cliff Dwellings is one of my favorite places now. I sat in the dwellings a long time and it was a very spiritual time. I could imagine the people living and working there and can only wonder at what became of them.

Next up: Photos taken in Silver City. The arts community has an ongoing program with area youth to paint murals around the town. They are beautiful and each one tells a story about the area.

This area was my favorite yet. I was awed by the cliff dwellings, the people, the beauty, and the history. Off to the next caper. Stay tuned.